Amazon will investigate gender bias claims in its cloud…

Sourcegraph on Wednesday launched Batch Changes, an automated internal coding tool that allows enterprises to automate and track large-scale code changes across all repositories and code hosts. For software developers, this is game changing.

This new tool also provides developers and enterprises with an easy way to manage the resulting change sets through checks and code reviews so they can be confident each change is merged.

Last year, over 800,000 developers used Sourcegraph to search and understand their code. In the same way that big data has disrupted data teams, big code is creating hurdles for enterprise engineering teams who struggle to navigate and make changes across increasingly large and complex codebases, according to Sourcegraph.

Businesses are dealing with 100 times more code than they did 10 years ago. At the same time, developers are expected to release code faster than ever before, according to Quinn Slack, cofounder and CEO of Sourcegraph.

“Instead of having each repository owner make the same change manually, Batch Changes enables developers to modify code across thousands of repositories,” he told TechNewsWorld.

Any software project’s code base is an ever-growing monster, in part because of the security built into it. With additional features, including an enhanced UI, there are a lot of things that make a codebase grow and in turn more difficult to maintain, according to Dirk Schrader, global vice president for security research at New Net Technologies (NNT).

“Having a tool that allows for a quick search and replace for code elements that need to be changed is certainly helpful. It will have to be used in conjunction with a versioning tool as the dependencies are mostly documented there,” he told TechNewsWorld.

Sourcegraph’s ability to find variants of a given code sample seems quite powerful, helpful for sure, he added. Unfortunately, the description is not specific about whether the programming language or development framework used has an influence on the tool.

“A comparison of that capability with some similar features in Oracle’s OpenGrok, as an example, would be interesting to see,” Schrader noted.

Not Open Source, but Competitive

Batch Changes is not open source. All customers, including users of the free tier, are able to try Batch Changes for free and create up to five changesets. Access to the full product is available as a paid add-on.

“Sourcegraph, however, does have a free and open-source universal code search product that developers can use to search and understand their code,” said Slack.

Instead of building this functionality from scratch internally, which is extremely time and cost-intensive, businesses can now use Batch Changes.

In a recent Analyst Day event, Twitter executives linked development velocity directly to the pace of innovation and shared a plan to “double our development velocity by the end of 2023,” according to Sourcegraph. That resulted in doubling the number of features per employee that directly drive either mDAU (monthly daily user statistics) or revenue.

To accelerate developer productivity and overcome the challenges of big code, some tech giants like Google have developed proprietary internal tools to automate up to 70 percent of code changes. However, most enterprises lack the technology they need to make large-scale code changes and instead resort to manually creating and tracking thousands of pull requests, explained Slack.

“The sheer amount of code most enterprises have creates a massive drag on development velocity,” said Slack. “When the developer experience is slow and painful, the pace of product development lags, and the entire business suffers.”

Batch Changes closes the productivity gap by empowering enterprises to easily keep code up-to-date and pay down tech debt across every business unit, repository, and code host the company uses, he explained.

The Batch Changes tool provides developers with a declarative structure for finding and modifying code across thousands of repositories. It features a simple UI to help enterprises manage the resulting change sets through checks and code reviews so they can be confident each change is merged.

“Sourcegraph has always enabled developers to quickly explore and understand all of their code. With Batch Changes, developers can now automate and manage large-scale code changes,” he said.

From there, Batch Changes enables users to:

Unlike the majority of internal tools, Batch Changes enables dev teams to track progress. Most teams still rely on spreadsheets and status updates to manually track pull requests, according to Slack.

Batch Changes is universal and allows dev teams to support a variety of needs (refactoring, configuration updates, quickly bumping dependencies up after a security update, etc).

“We have always had automated scanning tools, such as Snyk for Docker Hub and other static application security testing (SAST) tools, but nothing like what Sourcegraph is offering as far as I know,” he told TechNewsWorld.

Software coders have a tremendous need for what Batch Changes provides, especially at an enterprise level. Often times when you work for a software development company, you find yourself working with multiple repositories hosted on different platforms, he explained, adding that it becomes a hassle to track changes separately. 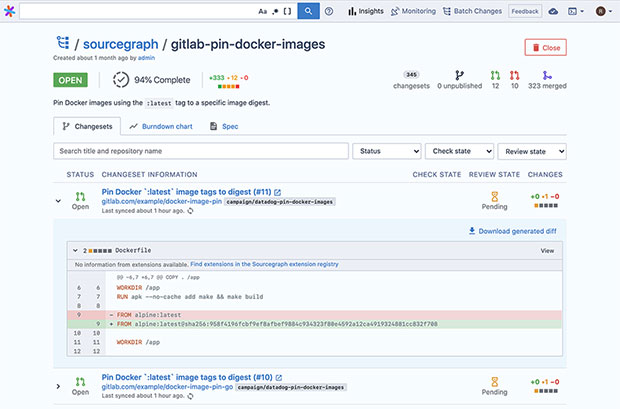 For example, when you are working on a framework, sometimes the same refactoring is needed across multiple source code. These can be millions of lines of codes that need refactoring. Being able to identify, change, merge, and manage your repositories from a single application is quite handy, said Lee.

“There is less need for this at smaller dev shops that usually stick to one platform to host their source code and also do not deal with other companies’ codebase, or having to refactor too much all at once,” he said.

What is reverse wireless charging?

Marvel’s Hawkeye show gets a Disney Plus release date